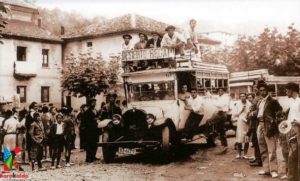 The city has an Environmental and Historical Interpretation Centre (CIHMA), where you can learn about these and discover many other interesting facts about the heritage and history of Barakaldo.

The exact date and the precise data of the foundation of the Church of Barakaldo,are lost in the darkness of the times The first major population nucleus,must have been formed at the mouth of the Galindo, in the so-called “Punta”, being the basis of a commercial and port production center of extraordinary activity.

This nucleus, which had no more than 50 houses, became Anteiglesia when the ecclesiastical organization of the territory was established, after the evangelization of the country, an organization that was based in the respective jurisdictions of the Roman legal convents.

Three are the periods in which you can divide the history of Barakaldo.
The first period has more than a millennium, of which there is no news.
From the second,which is that of the foundation of the Anteiglesia, it is known that in the year 1,051 he held his manor Don López Velázquez, as is known in Denomination Writing, in which Don Iñigo López is titled Lord of Barakaldo.

In this period the foundation of the Church of San Vicente stands out in the year 1.340, by Don Sancho López de Barakaldo, Don Lope Gonzalo de Zorroza and Don Galindo Retuerto, to third parties, dismembering that of Santa María de Erandio, undoubtedly because of the danger of vadear, in time of drunkenness, the arm of the sea that averaged. It was sold by his grandchildren to the Butrón and García de Salazar.

Three families stand out in Barakaldo:the Retuerto, Susunaga and lrauregui. In the year 1,370, the fierce wars of Flags took hold. As a result, the Brotherhoods are constituted in defense of the Civil Law. The pacification of the Bandos, is made by the Corregidor of Biscay, Gonzalo Moro.

The third period begins when it separates from the Encartations. In the year 1366, by concession of the Lord of Biscay, Don Tello, by paying a stipulated amount and by “powerof Biscay and the plot of Butrón, despite those of Retuerto, because the neighbors were more powerful and at the time that the Solar de Muñatones was much decayed by the war of the houses of the Sierra de San Martín” (according to Lope García de Salazar, in “Bienandanzas y Fortunas”),he joined as Anteiglesla to the rainy land biscayne, Merindad de Uribe.

It is represented by two loyals in the 33rd seat of the Juntas Generales of Guernica, the representative assembly of Biscay. In that time the anteiglesia had two hundred fireplaces. The first ironworks were already working, foundries that existed from Roman time, because it was Roman people who introduced water mills, causing the first revolution of the iron industry.

The first ironworks were set in the mountains, near the mineral veins and the forests that provided them with firewood. The water was only used for cleaning and tempering. Therefore, the best foundries were established among the Kadagua, Nervión and Galindo rivers, land of Barakaldo.

We should also highlight the rivalries and struggles it had with nearby villages, especially with Bilbao. They started because of exemptions and commercial and maritime jurisdictions, and they finished with the battle called `of Retuerto’, in which the ones from Barakaldo triumphed.

In 1499, the constable, Don Pedro Fernández Velasco, tried to build a village and a port in Barakaldo, near Lutxana Towers, and later his son decided to do it in Zubileta. Both attempts were vain as the town emerged victorious.

Also with the mining towns were rivalries. In 1664, Barakaldo complains at the assembly Juntas Generales de Guernica that despite having a letter patent for exploiting the mineral of Somorrostro, the neighbours of the three Councils, San Salvador, Sestao and Santurce, prevented them from doing it, arresting and fining them. Finally, the Councils imposed their mining claims, and the anteiglesia got no more than the work of loading and unloading `campaniles’ and `rubios’ (colloquial names for different ore kinds) on the rudimentary piers of Beurko, Lutxana and Galindo.

If at first was the mining the lure for people from everywhere, very soon the gradual industrialization moves the immigration’s centre of gravity to the area of Barakaldo.

The urbanization process is similar to the industrialization one, and this one starts in mid-nineteenth century. Juan E. Delmas, in 1864, referring to Barakaldo, gives us testimony of three factories. The first one owned by the lords Mwinckel, Arregui and Co., the second one, property of Santa Águeda, and the third one of the lords Ibarra and Co.

This last factory, Nuestra Señora Del Carmen, located by the Ibarra family at the confluence of the river Galindo with the estuary of Bilbao, was the main basis for the steel industry in the province. In 1882, the company `Altos Hornos y Frabrica de Hierro y Acero de Bilbao’ merges with `lberia’ and they set up the society `Altos Hornos de Vizcaya’, which will become one of the main exponents of the Spanish industrial economy.

Its configuration as a major industrial centre would result in the acceleration of the migratory movement and during much of the twentieth century, the population growth in Barakaldo has been impressive, becoming the most populated city (not capital) in the state, which is not just a record to be proud of, but also the clearest manifestation of Barakaldo being economically essential. The distribution of urban spaces was adapted to the new circumstances, and gray colour, and urban disorder, hallmarks of the industrial centres in Europe, invaded everything. Its economic importance led to the flourishing of an important service sector and not only shops, but malls, banks and insurance companies were placed in Barakaldo, the small ones coexisting with the large ones.

In the seventies, Barakaldo stopped being an industry benchmark, since the vast industry began to falter, and the decrease of the activity was a blow to those who think of life from and for work. The closure of Altos Hornos de Vizcaya has created a difficult situation; however, Barakaldo holds elements that can speak very well about its future. The work and commitment of its people are a good resource to recover and walk forward, until it became a city to live and work.

As the economic base collapses as a result of the industrial crisis, there is a significant loss of jobs, as well as a significant number of pre-retired people and
placed with purchasing power, but which constitute a non-productive sector, at the same time that a sector of young people cannot access the world of work: the generation of the sixties, from the “baby-boom” is unable to access the world of work, together with the woman who increasingly wants its incorporation into the world of work: it is from here that a new economic resurgence is born , with new activities replacing the previous ones.
Economic modernization passes through the settlement of new industries, supported by the development of the Port and the Airport as an engine, reusing the soils left by the old industries for the settlement of economic activity compatible with residential use, because these spaces are located in coexistence with the urban centers and so as not to repeat the mistakes of the past. To do this, it is necessary to create new communication systems and the construction of new streets that link the free spaces resulting from the disappearance of the old activities, bringing the city closer to the edge of the estuary, allowing the construction of new homes that replace the oldest ones.
One of the most important expectations is the development of the commercial sector, which will make Barakaldo the center of consumption in the Metropolis and point of attraction of the neighboring provinces, a shopping center that does not compete, but complements existing ones, pedestrianizing streets, creating free spaces and underground parking spaces that help the maintenance of the traditional trade existing in the urban center.